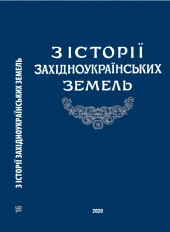 From the history of Western Ukraine / Edited and complied by Iryna Orlevych:  National Akademy of Sciences of Ukraine, I. Krypyakevych Institute of Ukrainian Studies.  Lviv, 2020. Vol. 16. 268 p.
Important pages of the socio-political, social, artistic life of Galician Ukrainians in 18th – early 20th century are illustrated. The problems of war as a challenge for society are highlighted, its influence on the  development of culture and religion is shown. Functioning and the evolution of religious  and cultural discourses in military conditions are considered, the role of the Church in the formation and establishment of national identity and its actualization during the First World  War is outlined. It is shown that the military experience of that time became a turning point for a modern understanding of the relationship between war and faith in Eastern Europe and  Halychyna. The role of the Russian Orthodox Church (ROC) in the deployment of the modern Russian-Ukrainian war is analyzed.
For historians, local historians, and for all who are interested in the history of Ukraine